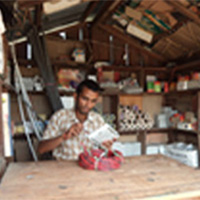 When BNMT staff met with Kamal, he was unemployed and living in a village in Surkhet district in Mid-Western Nepal. During the initial discussion we were able to find out that like countless young men from rural areas in Nepal, seven months back he had migrated to Malaysia for work as a labourer. Once in Malaysia he was put into hard work and was paid less than what had been promised to him while signing the contract in Nepal. Barely able to sustain himself, let alone earn an income, frustrated he returned back to Nepal. Without having any skill or work experience, he was unable to find any employment. After the initial interview conducted by BNMT and the local community, Kamal joined a skills training on house wiring.

After completion of training, Kamal immediately started working within his own community wiring the houses of his neighbours. After a month of buying electrical wires and accessories from the local market, he invested in a small electrical shop. Today, besides having the skills, Kamal is the proud owner of local electric shop. He manages the shop and also provides electrical services to the local community. After paying of his debt for opening the shop, today he makes a modest income.

This support has provided the encouragement for Kamal to stay back in this own village and earn a living thus proving that interventions like these provide positive example to migrant youth that they are able to earn enough within their own communities instead of going abroad to work a meagre income.