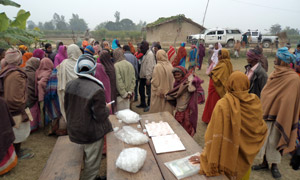 Stopping TB has been a top priority for the Government of Nepal for many years. Nepal is on track to achieving the Millennium Development Goal (MDG) targets for tuberculosis prevention and care. Two of the three MDG targets for TB have already been met: prevalence rates and mortality rates have been halved from their 1990 levels. The remaining target, to halve the incidence rate, is close to being achieved. This shows that the NTP is effective.

Nevertheless, TB remains a major public health problem in Nepal. Access to TB treatment remains limited for those most vulnerable to the disease: the poor, the socially disadvantaged and the marginalised. Poverty and discrimination restrict access to education, and hence to information about the disease and the availability of treatment. Migration for work complicates the process of identifying sufferers and ensuring that they complete a full course of treatment. Also Nepal’s health service still lacks the financial and human resources to reach all those affected.

A strong TB control strategy with bold but realistic targets, and backed by adequate resources, is essential for maintaining the progress made so far.

BNMT and TB control in Nepal 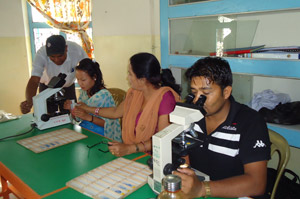 BNMT has served the people and government of Nepal in their struggle against TB for the last 45 years. The Trust’s work started in eight hill districts of Eastern Nepal, with direct provision of immunisation and treatment services by expatriate doctors and nurses. From the 1990s onwards, responsibility for these services was handed over to the government health service and they are now run by local staff. BNMT’s role became one of supporting the NTP, which it helped to establish.

The Trust provided training in TB prevention, diagnosis and treatment for health workers, laboratory staff and health volunteers. It also piloted new approaches to TB treatment such as DOTS, the internationally recognised approach to treating TB, and treatment and support for people with TB-HIV co-infection.

Over time, too, BNMT’s work expanded from its base in Eastern Nepal. It now covers all of the five regions across the country. Today, the Trust supports the NTP in training, monitoring, supervision, quality control of microscopy services, expansion of DOTS, development of improved case-finding methods and operational research.

Recently BNMT has completed a highly successful TB REACH project on active case finding in 15 districts of Eastern and Central Terai. This approach has now been adopted by the National TB Program.