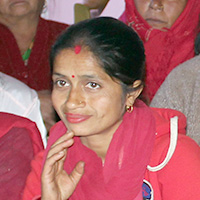 This is Ambika Dhungana, a female community health volunteer in Indrawati Rural Municipality Sindhupalchowk. She is outspoken and brave, talking about issues such as sex, child marriage, gender based violence, and menstrual health with confidence to transform attitudes During a training when this photograph was taken, she shared an inspiring story-

“There is a general superstition in my villages that when a menstruating woman touches a tree, the flower or fruit will die or decay.  My daughter participated in BNMT orientation programmes on menstruation. At home she told my mother-in-law, that when a menstruating girl or a woman touches a tree, flower or fruit, it won’t fall or decay. Hearing this, my mother in-law said it was absurd of her to say that. Later, my mother in law also participated in a program organized by BNMT Surprisingly, she came back home to say that the decaying of flower/fruit of a tree when touched by a menstruating women was just a myth, just like many other myths surrounding menstruation. Such a remark coming from my mother in law who holds a conservative thought was a complete delight for me. Nowadays, she lets us touch the fruit or flowers after bathing. Having worked on health for many years, and I had not been able to change the perspective of my community but it is starting from my own home now. So now, I understand change is possible, doesn’t matter even if it is slow process. It is really possible.”

South Carolinas State Board Of Education Approves Highschool Biology Course From Discovery Schooling For Statewide Use
In a world where competitors for jobs, pay will increase, and academic success continues to increase, certifications offer hope to candidates and educators. Certification helps to professional thesis writers build...