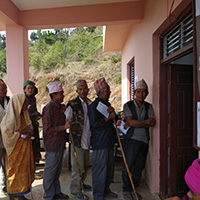 Shamsher Thapa (name changed), 45, resident of Pyuthan, was diagnosed with tuberculosis on February 7, 2018 through GeneXpert. Narayani KC, FCHV and one of the volunteers of TB REACH, thought Thapa might be suffering from tuberculosis during her contact tracing process. Mr Thapa and his wife were diagnosed with HIV three years ago and both are receiving anti-retroviral therapy in district hospital of Pyuthan.