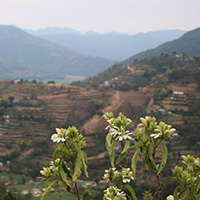 We were celebrating our family ritual, and in the evening, I puked blood. I was scared to death about what happened to me. My mother in law suggested that probably the ritual was not performed correctly, therefore I had to face the curse. We went to a traditional healer for quite some time, but that didn’t really help, as I had another episode of vomiting blood. It continued for another month. On my husband’s suggestion, we went to nearby government hospital and after visiting two hospitals I was suspected of having Tuberculosis. We were then referred to the health post near our home and I was finally diagnosed with TB there.

During the course of the diagnosis, things were very difficult for us because of the restrictions and lockdown imposed due to the COVID-19 Pandemic. Visiting hospitals and health post was an everyday challenge; we were captivated for quite some time by the police during our hospital visits. And the fear of being exposed to the deadly virus was constantly at the back of our mind. I could barely stand and walk; I preferred to stay at the hospital considering the care and treatment I could have received. However, the cases of the COVID-19 were increasing so the hospitals wouldn’t allow me to be admitted. I would throw up blood, have high fever every night and used to have body ache.

When I learned about my disease, the very first thing that crossed my mind was the fear that I could potentially transmit it to my 12 years old son and 4 years old daughter. I was more concerned for my daughter as I would feed her, sleep with her and even share our food. So I slept in different room after diagnosis; I was isolated from my children and other family members. My husband would do all the household chores. Since schools were closed due to the pandemic, it was little easier him. My daughter would say “mommy has TB, so I shouldn’t sleep with her”.

People obviously feared that I could have transmitted to my children so they started behaving differently. Those who would visit quite often, stopped coming to our house. That was really hurtful and I, unaware at first, would question myself about what went wrong.

My symptoms were not really improving even after I started my treatment. The follow up test at the 2nd month of treatment came positive and I was really scared about what was happening to me. I didn’t miss even a single dose of medication, yet I would throw up blood. The medicine was not working. Later I was prescribed another medicine to control that symptom.

A month later, my symptoms started to get better and I could finally feel my body getting normal. But the side effects of the treatment were unbearable at times. I would be nauseous all the time, had no appetite and would eat just for the sake of taking medicine. My husband tried hard to feed me. Slowly, all my symptoms started getting better and my follow up test result for 5th month came negative. I was so relieved that I could not contain my happiness! Then I started feeling that I would be cured one day.

Last month of treatment went by quite fast, probably because I didn’t really have any symptoms and the side effects of the medicine. My appetite was getting better and I was not tired as I used to be. The day I was informed about my test coming negative was the day I felt so free! I could finally hold my children, embrace them and feed them.

That night, I slept holding my daughter after 6 months and she asked me “Mommy, are you TB free now?” The emotion we felt in that conversation is unexplainable and words will never be enough.

I am very grateful for the love and the constant support that I received from my family. Support from family plays an utmost role in the treatment and outcome for the patient. And support as such during crisis upholds much higher respect and empathy. All I would like to convey to the people who are currently undergoing treatment is – continue taking your medication because it works and you will be better. All you need to focus is on yourself and taking care of yourself.