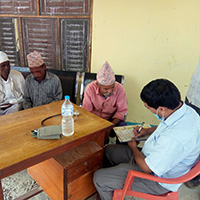 Shreedhar Khadka, an 83 year old residing in Chhatradev Rural Municipality, was diagnosed with tuberculosis by TB REACH project’s staff. Our volunteers came to know that Mr. Khadka was ill and was losing weight since a long time. When our volunteers visited his home another day to collect his sputum, he was at traditional faith healers (Dhami/ Jhakri) home performing healing rituals to cure Khadka’s symptoms. Intervening the person in front of a traditional healer isn’t considered culturally appropriate, so the volunteers requested the faith healer to allow them to talk to Khadka (for screening) and perform his rituals after that. While screening, they found that Khadka had persistent cough for a few weeks, had many symptoms similar to TB and he had not visited any health facility for the checkup. The condition of Khadka was very critical, he couldn’t even walk properly. The volunteers counseled and convinced him to provide two samples of his sputum for laboratory testing at district hospital. They themselves transported the samples to district hospital which takes 3 hours to reach by bus ride and walking. The results of his sputum samples were found TB positive. Khadka was immediately enrolled in DOTS in Budechaur Health Post with the help of the healer and a local female community health volunteer. However, daily travel to the health facility seemed impossible for Khadka. Thus, upon the approval of the health facility in- charge, one of the local female community health volunteers took the responsibility of providing him the medicines on daily basis. With regular medication, Khadka is now cured of tuberculosis; he is healthier and even more energetic than before. He now cooks food himself, and does animal husbandry.

AmplifyChange project dissemination
The dissemination of lessons learned program of the AmplifyChange funded project 'Advancing SRHR of adolescents of earthquake affected villages of Sindhupalchowk district, Nepal : A pilot project' was conducted on...