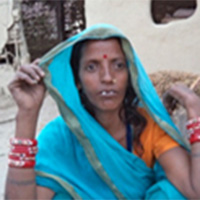 Dulari Yadava 50 year’s old woman Rajpur-3, Siraha had 6 months continuous coughing, with the evening rise of temperature and night sweating in the beginning one month. She also had severe chest and stomach pain. She lost more than 10 kg of body weight during her few weeks. She is a housewife and belongs to a poor family. She used to smoke bidi (a traditional cigarette like thing). She spent more than 4 hrs per day in non ventilated kitchen which producehuge amount of smoke from guitha (a traditional fuel made from dung of cow, buffalo, ox). Beside that she also helped her husband in farming, raring of animals they have domesticated like Buffalo, Ox. Farming was the main source of income of her family. Monthly income was even less than NRs. 5000 per month and owned only ten katha land.

She had already spent more than NRs. 30,000 for her treatment earlier. Previously, she started medication from a private practitioner in her village when she didnâ€™t get any relief, went to Jayanagar (in India) for treatment. She was treated almost one month there. She felt fine and came back to her home. Hardly two month had passed when she started coughing vigorously. She was unable to even speak because of coughing. She went to a private clinician in Lahan from where she was referred to Mirchaiya for treatment. Although taking medicine, she was not feeling well.

When the index case Dukhani Devi Yadav was interviewed, she suggested that her neighbour Ram DulariYadav was also having similar sign and symptoms, TB REACH volunteer collected Ms Dukhani three sputum sample, and was diagnosed positive. She was taken to the nearby treatment center, Bhaluwahi health post for further treatment.In the mean time TB REACH volunteer reached Ram Dulari Yadavâ€™s home and helped her diagnose with TB in a similar way. She was detected with active pulmonary positive tuberculosis in March 2013.She is happy now; at least the disease had been diagnosed.

Ram Dulari Yadav of Rajpur-3 is just an example how poor families who do not have enough money to spend on food, education and clothes are spending their money to be healthy because of ignorance. Awareness and advocacy on TB might save thousands of money of the poor people worldwide.

AmplifyChange project dissemination
The dissemination of lessons learned program of the AmplifyChange funded project 'Advancing SRHR of adolescents of earthquake affected villages of Sindhupalchowk district, Nepal : A pilot project' was conducted on...